A Clash to Remember

A Movie Review for my school's newspaper...

“Better than Troy though not better than Gladiator,” says my friend.

The gods rule all. They control life, death, prosperity and poverty. In a moment of anger, a hand wave may bring about unexpected famine or storm, destroying a chunk of humanity in the process. It’s no surprise that the people grew restless. They were angry at always having to appeal to the gods and wanted to have control. The people rebelled against them and tore down their statues, daring to insult the mighty Zeus (Liam Neeson –Oskar Schindler, Schindler’s List & Aslan, Chronicles of Narnia). Enraged, Zeus chose to punish the people for their arrogance.

Zeus called forth his brother Hades (Ralph Fiennes – Lord Voldemort, Harry Potter), whom he had tricked eons earlier into ruling the underworld, and told him to unleash the Kraken in order to annihilate the Greek city Argos. Unbeknownst to Zeus, Hades was more intent on destroying his brother along with the people that worshipped him with such earnest. Putting on a 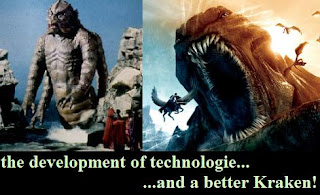 Meanwhile, on earth, a young man sets out on a journey for his own vengeance against the gods. Perseus (Sam Worthington – Jake Sully, Avatar), son of Zeus and demigod, has lost his earth family because of Hades and vows to punish the gods for their insolence. He is tired of the gods playing with people’s lives and wants to set things right. Setting out on a mission to knock the gods off their high horse, Perseus sets out to kill the Kraken.

Thus the mission begins and the adventure takes flight. Clash of the Titans came out on April 2, 2010. A movie full of excitement and adventure, this film greatly outshone the 1981 version from which it was derived. Though a talented film in its day, the past 1981 version provides more laughs than heart-thumping adventure footage with jerky transitions and makeshift costumes. Not only does the new film have a storyline both more in-depth and elaborate, but with the years that have gone by, the special effects were greatly improved and flowed smoothly into the fabric of the film. The musical effects topped off this fantastic feature, spurring emotion and suspense with the different tones and complexities, all in all enhancing the movie.

“It wasn’t as good as I thought it was going to be,” said my friend, Ana. “It was definitely worth seeing but not in 3D. I was flicking my glasses the entire time.” Unfortunately, Young had a point. The credits had more ‘pop’ than the actual screen play and the plot itself would draw a solid fan base without the 3-dimensional aspect. It also wouldn’t hurt to save a buck or two by not seeing the film in 3D.

On the other hand, an anonymous student said, “It was awesome!” Judge for yourself and discover if Perseus can accomplish his mission to break free of the gods and destroy the Kraken.