Udo is one of the bigger islands surrounding Jeju and it is also one of the more popular tourist spot.  Famous for its peanuts, Udo offers many peanut-treats (including peanut ice cream, peanut sandwiches, peanuts on waffles, peanuts on burgers...) as well as fresh seafood, and beautiful coastal views among other attractions.
We boarded the ferry at 8am from Seongsan Harbour.  The boats leave every 30 minutes on the hour.  The last boat depends on the season.  We learned this at the ticket office as we couldn't find times posted anywhere online.  It was really inexpensive, too. Audrey and I, we decided to do the Olle Trail 1-1 while we were on the island.  The trail gave a good circuit so we got to see a lot of the island, but it also meant I got to cross the trail off my list.  We're not entirely sure whether we walked 11.3 km or 16.4 km because it was written differently in two different sources.  But in any case, off we went.

By now, this was my 6th Olle Trail.  Unlike the previous trails that I have done, Audrey and I found this trail a little hard to follow.  We were going counter-clockwise (or the orange route, for those who know), and there were more than a handful of times where we had to double back because we missed the turn, or where we were confused because we weren't sure which way to go.
The trail was still lovely and we did manage to complete it, but it was a little annoying at times.  I think the way is a bit clearer when you walk the other direction (blue way), but then that means you're leaving the big hill (and that uphill), for closer to the end--which we didn't want to do.
By the time we were finished, we were very much physically exhausted.  We really didn't want to walk anymore than we had to.  ㅎㅎ.  We had some more ice cream as a final treat before heading back to Jeju--a little earlier than we planned, but because we were so tired, we were looking forward to getting home earlier.
We had hallabong and peanut flavours.  (Hallabong is a special orange that is grown on Jeju and it is considered the supreme leader of all the orange citrus family).  Audrey and I agreed that the Hallabong was more like dessert ice cream that you'd have at rare occasions and then the peanut one was a more mellow flavour that you might have more often.  Still, green tea ice cream could be had everyday.  ㅎㅎㅎㅎ.

I would consider going back to Udo again.  There is more I would like to see--ideally with a bit sunnier weather.  But I also feel that I can now cross it off my list.

Until the next adventure,

On the way to Sunrise Peak (click for main post), my friend Audrey and I stopped at the Jeju Folk Village (제주민속촌박물관).  We expected it to take about an hour to see everything (which is pretty standard for most of the museums we've been to on the island), but I think we'd both agree that there was more to look at than we thought.
There are more than a couple houses to look at--it truly is a small village and it was really cool seeing the layout and structure.  As well, the village had a very tranquil atmosphere.  There was no extra noise pollution from cars or radios and it was very relaxing to walk around.
Audrey and I wished we had rented an audio guide as it's not a text-heavy museum.  There are brief blurbs at different buildings, but it doesn't go into a lot of detail like we thought it would.  So we sort of guessed at the history when the words didn't tell us enough.  Haha!

I liked that there are traditional games that you could play at different points.  The rules are always in English, which is a drawback.  Bring a Korean friend to help teach you!  You could also go into the buildings at times, and they had signs in both Jeju dialect and, um... "popular" Korean all over.
If you didn't know, while they speak Korean on Jeju, the dialect is so different from what's spoken on the mainland, that other Koreans cannot understand.  It is its own language.

All in all, I enjoyed the museum and I think I would go back again if I have the chance.  Due to hunger, Audrey and I rushed through some of it so there's definitely parts that I haven't seen yet.  If visiting Jeju, it might be a place to consider visiting, depending on time and personal interests!

As the weather has been getting nicer, one of my friends and I decided that it was time for new island adventures.  There are only a few months left to this school year and we want to enjoy as much as we can.  And while I'll be staying in Jeju for next year, a number of my coworkers are returning back to their home-places (or just moving on to somewhere else). Thus time is precious!

Audrey and I decided to start our travelling off with a bang by heading out to the far side of the island to climb Sunrise Peak FOR sunrise.  While I had the chance to go to Sunrise Peak at the start of the year, my friend had yet to visit.  And as we get closer to the solstice, the sunrise will only be earlier, making it harder to get to the top in time.

This past Sunday, after church, we began our journey (시작!).  We really lucked out with the weather.  Saturday's rain makes Niagara Falls look like a drizzle. It was awful--especially because of the wind.  I was out with some girls when it started and had to drive carefully as the wind attempted to push me off the roads.  But!  The rain left the world feeling super fresh for our adventure!
After a brief stop at the Jeju Folk Village (and then a stop for green tea ice cream!), we continued our way along the coast until at last we could see the peak!

After checking into our hostel and at last eating our first meal of the day (Ha. It was one of those random food weekends for us), we went to explore the peak.  As we'd be climbing it before sun-up the next day, we wanted to see it a bit in the late afternoon light.
I think the coolest part of this day was when we got back to the hostel (The Yellow Submarine Guesthouse, via Airbnb).  Both of us were pretty tired, having come off a week of overnight shifts, but then the owner came to our room and asked if we wanted to join them for dinner.  Surprised, but curious, we said yes.  There were six of us in total: the owner and one of his employees, two young soldiers on vacation, and then Audrey and me.  While I could understand bits and pieces, Audrey helped out a lot as translator.  It was a lot of fun and a really awesome experience.  We might have stayed up a bit too late as a result, but no regrets.

Sunrise Peak is open an hour before Sunrise.  Monday morning, the sunrise was just before 6 which meant we wanted to be out of our guesthouse around 5.  It takes about 15-30 minutes to walk to the top depending on speed.  I recommend bringing a flashlight.  Sources on the internet told us it would be well lit, but no. It wasn't.  At all.  We managed with little problem (although it was sprinkling a bit and rocks were wet), but it would have been nice with a bit of ground light.

Unfortunately, Monday morning was really cloudy which meant we couldn't actually see the sunrise (it just steadily got brighter, haha), but there was still a stunning view back toward Halla mountain.  And really, it just means that Audrey and I will have to go again. ㅋㅋㅋㅋ
By 6:30 we were back down at the bottom and ready for the next part of our adventure.  But, more on that later.
Love and Hugs.
at April 19, 2016 1 comment:

is easy if you like cake.  You can get cake everywhere.

It's hard to believe that this is my second year in a row where I'm not even in Canada for my birthday.  This time last year, I was navigating my way on the Tube trying to get out of London (and unfortunately discovering that the line I needed to take was down for maintenance leading to a super long detour) so that I could meet up with some of my extended family.  We then drove across the country on our way to Cardiff where they lived.  It was a long day of travel that ended at Pizza Express (which sounds like the name of a fast-food restaurant but is more like gourmet pizza).  This year's b-day celebrations couldn't look more different.

This year I am in Korea and this year, as my birthday was mid-week, I had to work.  Although in all honesty it still wasn't a bad day.  I was able to relax a bit in my downtime before going on duty and was able to enjoy the time with my coworkers and my family of students.

My students are not the most... stealthy individuals, and I really hope they weren't trying to be because if so they failed miserably.  As I washed the dishes at the kitchenette next to my room, one by one they came in, taking off their shoes and turning on the lights.  They weren't exactly quiet in this process either and while I couldn't understand all that they said in Korean, the intentions were clear.  After most of them had gathered, they called me in and had me sit at the head, creating some excuse as to why we had a random family meeting.  And then they brought in a cake and started to sing--and maybe scream slightly (oops. haha).

Although I might not be much of a cake person, I was so honoured that they thought to do something special.  I'm lucky to have such a great group of girls as students. (우리 가족이 짱이야!).  And while I'm missing my friends and family from back home, it helps feeling the support and love here.

So here's to another birthday away from Canada, with all it's quirks.  I survived another year in this crazy world I call home.  I suppose that is an accomplishment. 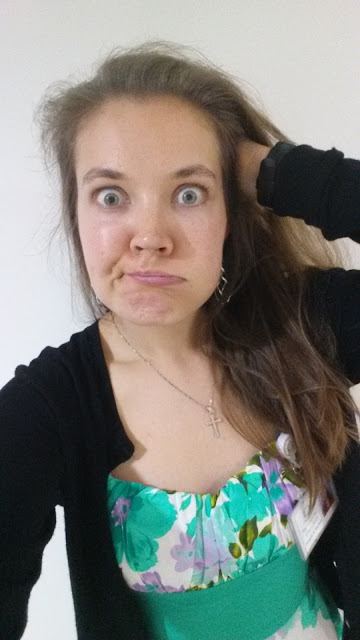