The life cycle of a snowman

Jeju's blizzard of 2016, the worst snow storm to hit the island in over 3 decades, disappeared nearly as fast as it came.

For three days, we had nothing but snow.  The sky would clear briefly, creating the illusion of the end, and then the wind struck again, and the white screen blocked out everything. The following two images were taken 6 minutes apart on January 24th.  The cycle repeated many times all afternoon.
Many of the students were beyond excited and for some, it was their first time seeing so much snow in one place.  Despite coming from Canada, it had been a few years since I had been surrounded by so much packing snow.  The last couple of years had been so cold that it was more an icy powder than the desired sticky snow.  Naturally, I did what made the most sense:
I made a snowman.  When the snow was still thick the following day, I decided to make another:
The weather was already getting warm again the morning of the 26th, and sadly my first snowman did not fare well through the night.  It seems he had a bit too much to drink and lost his eyes.


And by the following day, all three snowmen had had enough...
Just like that, the blizzard's power was gone.  Today, the 28th of January, it is 10°C and it has rained all day.  The snow storm already seems like a distant memory with small piles of snow remaining.

Should I pity the life of a snowman?

This past weekend I had planned to at last visit the city of Busan (부산).  While not as big as Seoul, I have heard that Busan is a fun place to visit and I was really excited.  Plans were made for both accommodations and some meetups and I was ready to hit the ground running.

Alas, my plans were not meant to happen.  Saturday morning, as I was ready to go, Jeju was hit (and is still being hit as I write this) with the worst snow storm that it's seen in more than (some say) 38 years.  I was told that Jeju never gets much snow and that the snow is mostly on the top of Halla.  Well, not this year.
The adventure began at the bus stop.  I feel like a lot of adventures begin at bus stops, and in this way, ours was no different.  I was with my friends Audrey and Jenny who were also heading to the airport.  Their flights were for Seoul while mine was for Busan.  Even though there was already a lot of snow, we were excited and optimistic.  I had heard that the snow was worse where we lived and thought that it would be okay in the city and at the airport.  My biggest concern at this point in my journey was weather or not I'd miss my flight (pun intended).  The bus had trouble getting to the city and what is normally a 40 minute bus ride to the airport ended up being 1.5 hours.

Maybe I should have missed my flight.

I raced through the airport.  It was 11:45 and my plane, scheduled for 11:30, had been pushed back to 12:10.  The lady at the desk looked at my information and quickly handed me my boarding pass saying, "학생 (haksaeg; student) run!" I made it to my gate just as they were boarding.  I really hoped that the bus ride was the worst of it.

When it became clear that the flight was being delayed longer, I settled into wait.  The snow kept blowing out across the tarmac, stopping for brief periods of 20-30 mins before swooping in like a fire blanket: thick and smothering.

In the end, I boarded a plane for a 5.5h flight from Jeju to Jeju.  Around 17h00 they told us that our flight was cancelled and we started rolling back to the airport to deplane.  My first deplaning.  ㅎㅎㅎ.  Well, since my flight was cancelled, I needed to cancel my return flight scheduled for Monday and so I then headed to the Air Busan service desk. As all flights were cancelled at this point, Audrey and Jenny were in their own lines and we agreed to meet up afterward.

By 19h15 we were finally all done.  And now came the hardest question: what next?  With the weather so bad, no taxis were heading back our way and we weren't really sure about the bus either.  That meant staying in Jeju for the night.  But how did we leave the airport and where did we go?  While we were all starving (we hadn't eaten since breakfast), all we wanted was a roof over our heads.

Luckily, Jenny's mom has connections and after a few calls we found a place to crash.  But still: How did we get there?

Supposedly there was a shuttle bus, so we waited.  By 21h00 it was clear that it wasn't just running late and so we decided to try the taxi stand.  Unfortunately, the taxi stand was in the wind and the taxis weren't coming often enough and the cold soon chased us back to the airport.  We had tried calling a taxi earlier but the companies were so busy it was hard getting through.  (And by we, I really mean Jenny since she speaks fluent Korean).  But we were desperate enough to try again and thankfully we got lucky.

22h00 we were at last made it out of the airport and to a safe haven at 코스트웨이 (Coast Way), a pension run by Jenny's mom's friend.  She was super nice and even made us dinner for which we were so grateful!
The worst of our adventure was over, and thankfully we were able to laugh and joke about it as we went.  We all agreed that had we been alone, we probably would have been miserable, but together we managed to stay somewhat optimistic.

Sunday morning, we managed to catch a bus to the terminal and then the bus back home.  While the roads were still bad and it took longer than we hoped to get back home, we made it.  By 15h30.  Just like that, our weekend was pretty much gone.

This quote was on the wall at the pension and I felt like it spoke a lot into our situation:
"Lost wealth can be regained, but lost time never."

We were able to get a refund for our flights, but our time was lost. However, I think that despite our circumstances, we were still able to laugh a lot and have fun. It certainly was an interesting adventure.
at January 24, 2016 No comments:

Well, it's just about time to head back to Korea. It's been a fun couple of weeks and I had a lot of fantastic experiences here in Malaysia, but I am ready to sleep in my own bed again. I am also looking forward to some good Korean food.  I have enjoyed the food in Malaysia and Singapore, but I like Korean food better.

My first day on Peninsular Malaysia, my friend Jade and I trekked it out to the Batu Caves.  The Caves double as, well, caves, and a temple.  It's a pretty touristy-spot, but a cool one nonetheless.  Be amazed at the impressive exterior and giant statue:
You can go all the way up and into the temple section, but in addition, near the top their is a cave veering off where you can go on a tour and learn more about the caves in general. The cave tour features lots of bats overhead (some squeaking some not) and other cave dwellers. Unfortunately, we didn't get to see any snakes but we did see lots of spiders, a rat and a couple centipedes and cockroaches.  Yum yum.
But, the best part of the experience was seeing all of the monkeys.  They came right up to the stairs and wove between the pedestrians.  I was borrowing Jade's camera and was able to snap some awesome shots.  I feel like a stellar photographer now!
And of course, another couple more monkeys here: 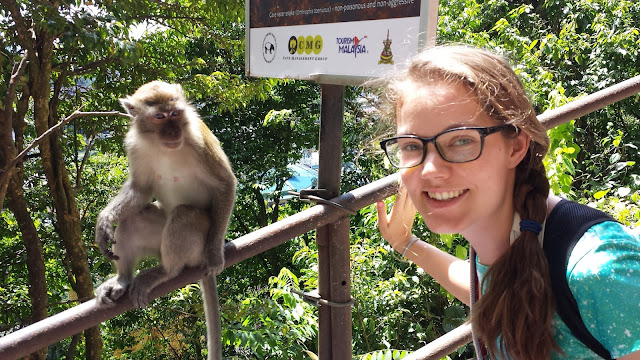