Should I be writing this right now?  Probably not.  I'm in the middle of two papers that are due Monday, but today's been a slow *school* work day and I think another twenty minutes won't completely derail the bus.  Who knows, maybe inspiration will strike as I write this post... 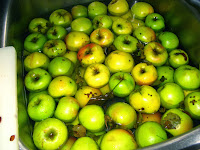 I can't believe that October is almost over.  I look back to the start of the school year and I don't understand where all the days went.  Everything has been nonstop go.  I don't know why I thought that 4th year would be easier--well that's a lie.  I thought it'd be easier because I don't have the extra Con-Ed class and placement this year.  Even with the extra "free" 10 hours, I'm still ever on the go.  But hey, that's in part my choice.  I like to keep busy. 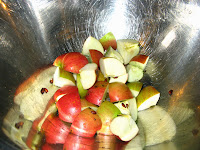 Speaking of busy, I had a bit of an adventure this week with my friend Sally.  You might be able to guess what it was (it's not like the clues are hiding), but I'll say it straight out anyway: we made applesauce.  And oh my purple pumpernickel pizza, is it ever good.  On Wednesday of this past week, Sally and I filled two sinks full of apples and prepared to turn them into delectable, golden brown mush. 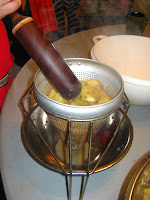 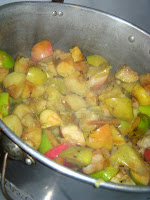 Apple trees are in abundance near my house and Sally's parents have a couple trees on their property, too, so we didn't have to pay for them, but that also meant we had to be careful as to what might be lurking in their depths.  First step them was to wash and cut the apples up.  We cut them into 8ths and then threw the good ones into pots on the stove with a bit of water.  The kitchen began to smell like... warm apples (were you expecting me to say something else?) and steam began to rise.  We had three full pots on the stove which meant we'd be getting a lot of sauce. 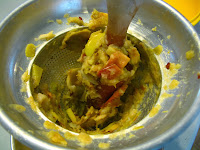 I'd say the hardest part was waiting, but by the time we had done the dishes from the cutting and stuff, the apples were good to go.  We poured a pot into a bowl sitting between the two of us and then started in on the hard part: the mushing.  I shall call it the mushing because I really don't know how else to name it.  Sally had these two colander-like things with wooden peg-like things (descriptive, I know.  That's why there are pictures. hehe.).  We scooped some of the mess into each and then used the wooden dowel to squish the apple's sauce through the holes while all the seeds and skins remained in the device.  It was pretty handy but it took a while and a lot of effort.  It was worth every drop of sweat.

By the end, we had roughly 32 cups of apple sauce. 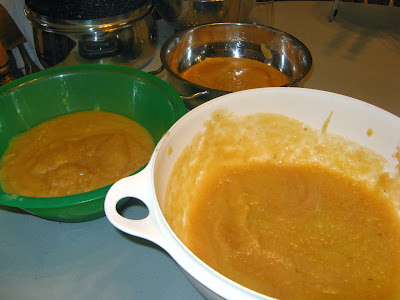 I filled four 1L jars and we sealed them shut in Sally's canning pot. 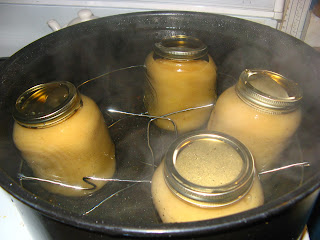 Look at how beautiful they are, all full and sealed: 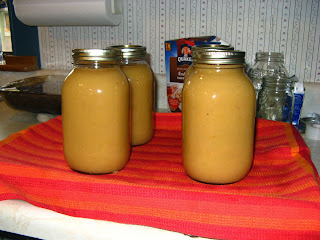 I honestly don't know how long they'll last me.  I like to ration things, but I also know that I don't necessarily need to ration them.  I opened my first one today and though I didn't eat it warm, it's still just as good with just the right amount of tang--so much better than any store bought applesauce and I can honestly say it's just apples.  Well, before we canned mine shut, we added some lemon juice.  Don't want anything going bad, you know. (I know the look you're probably giving me, Melanie).  The juice is undetectable, or at least I think it is.  I like sour things so maybe I just can't tell.  Either way, it's delicious.

Actually, I think I'll go get some to eat right now.