An Unintended Food Outing (or UFO)

I have given up on knowing what I am eating.  I've reached a point where I merely accept the food offered and then hope I like it.  Generally, I do like to know what I am eating, but I have found it hard to keep track of what's what in our school cafeteria.  The menu is always posted, but as I go down the line of serving women each meal, I can't always tell what is supposed to be what.  The ladies are always so cheerful as they hand out food, that I also find it difficult to tell them no.  So, I just let them put whatever it is on my plate and hope that I like it.  I can only say one thing for sure at this point: I am not a fan of acorn jelly.

Anywho, the regular cafeteria food is not the reason I am writing this post.  This morning, I had an unintended and unidentified food outing.  A UFO, if you will.  ㅎㅎ.

I was determined to visit Gapado this morning.  It's a small island just a few kilometers south of Moseulpo Harbor.  According to my research, it takes about an hour to walk around the whole island and so I thought I would give it a go--do something more active away from the school.  Due to inconsistent information about ferry times, I headed in early this morning, determined to catch the first boat out, even if I had to wait.  While waiting, I met some of the other passengers--all Korean.  I attempted to make conversation which led to a asking if anyone spoke English.  There were a couple.  An ahjussi and his friend were heading out and coming back on the same ferry as I and so they sort of "adopted" me.
I had planned to just walk around the island, but after we landed, there was a moment of confusion.  They looked at a giant wall map of the island with me and then gestured toward the bike rental store.  As much as I love cycling, I wanted to walk today and conveyed this to the two ahjussi.  They nod and then gestured that I should follow.  Not knowing what to do, I did as I was told. 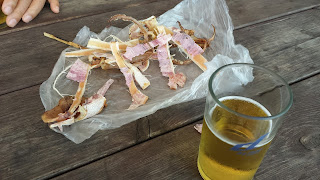 This led to my adventure.  I will have to go back to Gapado because I did not walk around the island at all, really.  I followed the men across the island (which only took 15 or so minutes) and around another small harbor where I was then told to sit at a table.  The next thing I know, I am being told to eat and drink.  The first thing was dried squid... I think.  I am not entirely sure beyond the fact that it was dried, fish-like, and very chewy.

The next food that came out was different. Voici my UFO.  I could easily tell that it was some sort of aquatic life and that it was raw, but I had no idea what it was.  My parents didn't raise me to be rude, so when they told me to dig in, I ate despite being hesitant.  When I showed the picture to my friend later, she said that she thinks it's abalone, but that's just the best guess.
Honestly, the food wasn't too bad.  It's just different from what I'm used to which makes it weird for me to eat.  The abalone-like thing had a chewy end and a harder, cartilage-like end.  I had to chew hard to get it to break down before swallowing.  We were given a hot sauce and a peanut sauce for dipping along with a dish of seaweed and a jelly thing.  I can only guess that it was more acorn jelly (which I dipped in the sauce and ate, too).  The hot sauce had a nice kick to it and by the end of the meal I could almost breathe fire.  I don't know if I would order it this on my own, but it was fun to share.  The men mainly talked among themselves and then would try and ask me things.  Sometimes those moments went better than others, but it was still fun.
On the way back to the boat, they asked me to sing a "Canada Folk Song."  Not knowing what to sing, I just sang O Canada while they clapped along.  They then sang Arirang for me. Most definitely a cool moment.

What I most liked from today--and really from all my outings so far--is that despite the language barrier, I've found that the people on Jeju are just so willing to help.  Sometimes going out of their way to ensure that you understand or you're where you're needed to be.  It's a good reminder to do that for someone else, too.