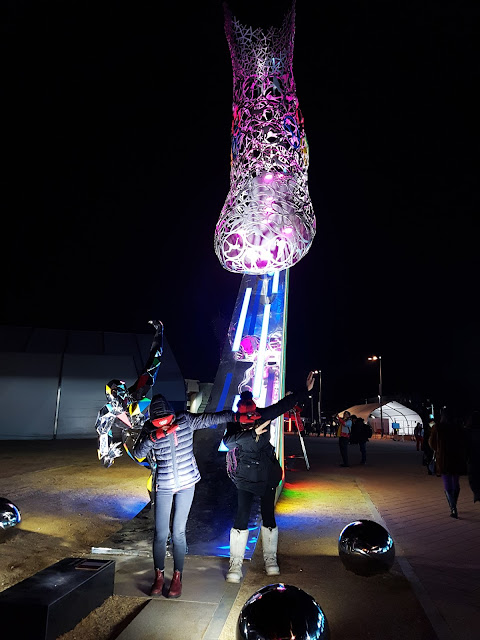 When I first moved to Korea 2 and a half years ago, the Pyeongchang Olympics were a distant star on the horizon. Yeah I wanted to go, but I had no idea if it would actually happen. At the time, I didn't know if I would still be living in Korea! Et maintenant? Well.

Pyeonchang was amazing. Crazy. Unforgettable. Unbelievable.
Would I do it again? In a heartbeat.

Would I do it the same? Probably not.

I was a noob. I was busy with work and didn't bother to research some things ahead of time. Now I know, and now here are a number of things I learned (for next time!).

1. Stay close to transit.
If you can't stay near the central areas, at least stay close to readily accessed transit. I know each venue is different in how they organize themselves and their transit, but Pyeongchang was pretty spread out. It makes sense when you have that many events and that many people--it would be foolish and suicide to have everything in the same area! Shayna and I lucked out with an Airbnb situated a short 5 minute walk from the Kwangdong Hockey Center. With shuttle buses running frequently throughout the day, it was easy to get back to the train station and other shuttle points. If you stayed further out, there were parking lots located with frequent shuttles as well. The only downside is that shuttle buses don't always take the most direct root and it can be a long trek between locations.

2. Consider location when you plan your events.
Building off the end of (1), even with the convenience of shuttles between venues, consider the spread of the land. We had to forego one of our scheduled events (where Canada ended up with a medal!) because it was impossible to get there after our previous event. We were with friends at the SWE vs NOR hockey game at the Gangneung Hockey Centre. The Luge was out in the mountains at the Olympic Sliding Centre. Transportation time? 2+ hours on the shuttle. With security and lines, they recommend you arrive 1-2 hours ahead of time. Between events we only had about 2 hours. If our event had also been in the Gangneung Olympic Park, it would have been feasible, but... When I first booked the tickets last spring, I never really thought about location which was our downfall.
3. Event Selection?
We had a good spread: Ice Hockey, Skeleton, (our would-a-been-but-missed) Luge, Long Track Speed Skating, and Slopestyle Skiing. We went to 5 different venues and got to see a fair bit of the spread. While not all of our events were the most spectator friendly (*cough*Skeleton*couch*), Shayna and I agreed that we would go again if given the chance. For the events requiring a longer track, the television really does offer you the best view, but watching the Skeleton whizz past faster than you can blink and waiting for the skier to leap above the ridge... That anticipation and hope for success sticks with you. Not to mention the camaraderie you feel with the others present. If I ever get to go again, I want to try something new, too! 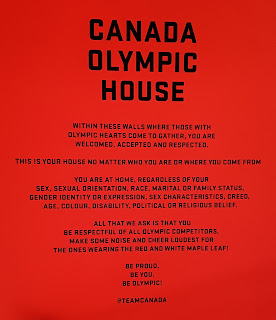 4.  House Day, eh?
My sister will forever say, "I told you so," because she did mention this to me back during my Christmas Break, but I didn't really understand, nor did I really do the research ahead of time. Although she didn't really come with research either so... she shouldn't have left it all to me to plan! Country (and sponsor) houses can be a huge part of your trip. Some are free and some are not. Some only welcome athletes while others are open to the public. Some have events, some give away free things, some have cultural foods. The Canada House had a giant screen broadcasting events. Definitely cool to watch altogether even if the event was happening less than a kilometer away!

If I did it over again, I would plan to visit more of the houses. They were scattered throughout the venues, so like events, it would be best to create a navigation plan. I would even consider going to the Olympics and visiting houses only. Potentially cheaper and yet you'd still be in the midst of that atmosphere.
5. Talk to everyone.
There are people from all over the world--most decked out in country swag. Strike up a conversation and meet people! My sister and I met a lot of Canadians (you know, we're sort of drawn together when we have matching gloves and hats!), but also people from a number of other countries. Living on Jeju island, I mainly meet Koreans and my co-workers. I loved being in an environment where I could hear other languages. It was fun just grabbing food, maybe a drink and just hanging out.

6. Dress for the ball. All the SWAG.
We did not bring enough Canada things. I should have brought face paint. I should have worn a jump suit, a onesie and a red wig. I would feel totally outlandish being so up-in-your-face, but it was also really cool seeing others go all out for their countries. Plus, you can win prizes or at least appear on camera which would be equally cool. Ha. Still searching for our 15 minutes of fame!
Love and Hugs
at February 19, 2018