Happy Wednesday! Last one before the Holidays start! I'm so excited! I'm working on an Essay at the moment so I don't have time for a long post, but I was thinking about old things that I had written and found a story I wrote in a challenge on Cleanplace.net in the winter of 2008. It's the first story I ever completed and I felt like sharing it. It's twelve scenes in total so you'll have to keep coming back to see the whole thing. Hehe...

As we go on, I'll tell you more about the actual challenge. It's not the best I've ever written (because it is my FIRST FULL LENGTH STORY! YAY!), but I had lots of fun writing it, so enjoy!

~Rachel
Made to be HIS child 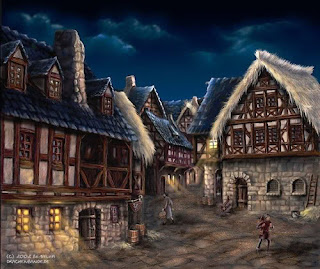 Night was fast approaching as Anita hurried to the Drango Tavern. After visiting her Elvin grandparents, she was eager to return home and see her best friend Runil. A strong gust of wind blew through the streets, urging her onward as if it knew something approached from the glooming clouds blanketing the sky. The door opened under her touch releasing the many sounds and smells as men and women enjoyed their warm meals on the cold August night.

Cloaked from head to toe, Anita headed to the bar and sat on a tall stool. Lowering her hood she smiled as she said, “Good evening, Sally.” The bartender turned and raised her head. As she saw Anita she grinned.

“Anita!” she said in a booming voice that would have been heard down the street on a quieter night. “How have you been?”

“Well, thank you,” Anita replied while accepting the warm mug Sally handed to her. “And yourself?”

“Never better! Business is going splendidly thanks to all our new Elvin brothers from the east. But whatcha doing back so soon? Weren’t you with your mum’s folk?”

“Yea, but I was missing Runil, we’ve barely been apart since the catastrophe and all so it just wasn’t the same.”

Anita heard the sorrow in her friend’s voice and asked anxiously, “What? What happened?”

"Gone? What do you mean gone?"

The sound of the door being forced open stopped the reply. A stranger stood in the door frame. All talking ceased as the tavern took in the sight. A woman with long curly blonde hair gazed around the room, her grey eyes searched and stopped when she found Anita’s face. She was tall with red lips and a curved figure. She wore a tight black blouse with light brown breeches and around her shoulder draped a magenta cloak.

All talking had ceased as the tavern took in the stranger. Opening her perfect red lips she asked, “Anita Iatna?”

“That's me,” Anita said, slipping off her stool. The woman was a head taller than her and definitely beautiful. Anita had pale skin and wild brown hair in comparison. Her nose was sharp and her cheeks hollow. Her chest was still flat even though she was 17 and she was skinny. Only her bright green eyes showed promise of hidden beauty. “Can I help you?”

The woman smiled, a cold, cruel smile. “Yes you can. I'd like to talk to you privately.”

“Please would be nice,” Anita muttered under her breath, but she could tell this woman meant trouble, so smiling at Sally she walked down a hall on the left side of the bar, towards the conference rooms.

The tunnel went deep into the bar and many doors branched off leading to different storage rooms. At last they arrived at the end of the hall where a windowless room waited for their chat. Once in the room, the woman shut the door. “I need your services Anita,” she said, her voice urgent and harsh at the same time.

She scowled. “My name's Cynthia and that's all you need to know,” she said through gritted teeth.

“Why should I help you?”

“Because you have nothing better to do and Runil would want you to help me.”

Anita paled slightly. “What do you know about Runil?”

Cynthial sneered. “Enough. Now do I have your attention?”

Anita nodded, her brain working furiously, trying to find the reason this woman had targeted her. Was she somehow the key to something? I know I'm a relic hunter and all, but if this is about some old artifact, an artifact that will hurt Runil... her thoughts trailed off as Cynthia began speaking again.

“I need you to find the Embyr Stone.”

“And you can't find it yourself?” Anita asked.

“I am too tall to get in the location,” Cynthia replied, eyes cold behind rapidly blinking lids.

Anita couldn't put her finger on it, but the situation made her uneasy. Something's wrong here, but what? she thought and then asked, “This stone is important because?”

“Lets just say without the stone, there will be one less human on this earth.”

Anita's face paled as Cynthia grinned, but even though she was scared for Runil, she couldn't help but feel curious. Who would kill for a stone?

“I thought you'd understand. Now, I need it within a week so you only have 7 days.”

“That won't be enough time! I don't even know where to begin looking or what this stone can do, where it was last seen and so on.”

Cynthia searched her cloak until she withdrew a small slip of paper from its folds. “Here,” she said placing it on the table. “Good luck and don't try to weasel out. I will know.” And with that she turned and left the room.

Anita sat still, stunned in the silence and slowly reached for the paper. On it read a short poem:
Found in a place of Ice & Fire
My core is bound in light wire
Strength is given to you who seek
To aid and help all who are weak
The rest of the paper was empty, as if the rest had been forgotten. The Embyr Stone, she thought. Oh boy, it looks like I'm on another quest and I'm not prepared in the least. Standing, she place the paper in the folds of her jacket and headed to the door.

Back in the crowded bar, talking had resumed and Sally was busy serving new customers. Spotting Anita, her eyes grew serious, contradicting her merry features and asking silent questions. Anita reached for her regular room key and mouthed, “Tonight,” before slipping silently up the stairs. She had some thinking to do.
at December 16, 2009