I write to explore and learn. And to be honest, what could be more interesting than exploring some aspect of an infinite Creator. That's got car chases, steamy romances, and alien spaceships beat hands down. I think of those angels in Revelation around the throne crying, "Holy, Holy, Holy!" Originally, I used to think they had the most boring job in the world. Can you imagine saying that over and over again, 24/7? And it would be boring... if you were only preaching it or reciting doctrine. But what if every time they cried, "Holy!" it's because they've discovered some new and incredible attribute of God? That's entirely different. And that's what I try to do in my writing. Folks who dismiss me as a "religious writer" probably figure I'm just pontification. Maybe I am, but I don't think so. I may cry, "Holy!" but I cry it out of the thrill of discovering another attribute of an infinite God.

-Bill Myers
What did I like most about The God Hater? 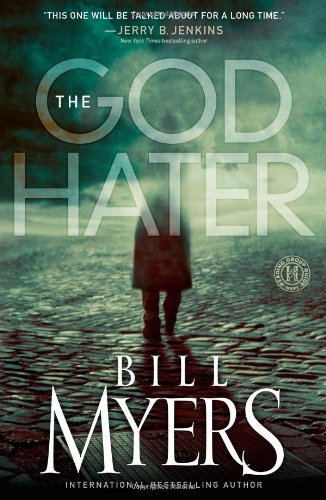 I really loved how the story pulled me in with the relationships between the characters. I really liked how despite the different view points between Annie and Nicholas, the two were able to be friends. I also really liked the entire plot line of the artificial intelligence. [Which was what the book was about, but still]. It was so interesting to travel "into" the artificial world and to see the people acting--well, like people. And to see that world slowly evolve and change... it blew my mind at times. I got so excited at different parts that I had to share with my friends.

What did I not like?
As I was blog hopping yesterday to some of the other blogs in this tour, one blogger mentioned something that had been at the back of my mind: the plot line for the corporations was a little weak. It wasn't weak enough, in my opinion, to detract from the story as a whole, but I think it could have been fleshed out a little more. The corporations were the bad guys in this, but they weren't all together present. At the same time, by not having them as "present" the focus wasn't drawn on them but on the actual program and the stuff going on between Nicholas, Travis, Annie and Alpha... so, it all kind of balances out.

I'd like to add...
That I loved this book. As I mentioned, I got really excited while reading it. This book is the kind of book that I would go out and buy on my own--and I don't say often. I love books, it's true, but on my book shelf, I prefer to only keep the ones I'd reread later on. This is one of those books.

I most definitely recommend checking it out if you have a spare moment!

I love the Myers' quote you opened this post with. That one struck me too when I read it.

Nice assessment of the book. It's always nice to find a new book that one falls in love with--especially when you can share in a format such as this tour. :)

Whoo-hoo! So glad this one makes your "keeper" list, Rae.

I really enjoyed all your posts for the tour. Great job.