While in Seoul, I decided that I would make an effort to go to some unique cafes that you don't find in North America--or that are more rare. My research revealed way more cafes than I had time to visit so I just picked a couple.  The main two I visited were within walking distance of each other (although due to opening hours, I ended up going back to my hostel in between times).

Thanks Nature Cafe
(Pretty close to the Hongdae Subway Station)


Bahhhhh.
Yes. Bahhhhhh. Like a sheep. Well, is a sheep.  Thanks Nature Cafe is a sheep cafe and they currently have two sheep for their customers to... sit with.  I don't know if you can really play with sheep.  They aren't dogs or cats... I am definitely not a sheep expert.

If you think this is somewhat unclean, do not worry.  The sheep portion of the cafe is actually located outside of the "cafe" portion.  It was a cute cafe and I would consider going again if I was in the area. 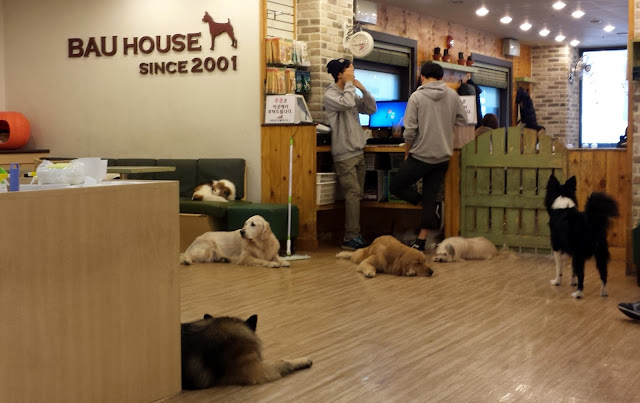 Yes, friends and other friends, I went to a dog cafe.  I'm missing my dog from back home and wanted to spend some time with giant puppies since I rarely see them during day to day life.  Bau House does not open until 13:30 on weekdays, which my research hadn't told me.  (I think it opens at 12:30 on weekends for anyone who might want that information).

"Admission" is dependent on a purchase.  You can't just come in and play with dogs--nor could you do that with the sheep.  You have to buy a beverage.  The other reviews of the cafe are pretty consistent in saying that they are somewhat more expensive.  I paid 7,000 won for one of the cheapest options, but the dogs made it worth it in my opinion.

The cafe has treats that you can buy for the dogs, and everyone gets excited when one of those bags are opened.  They immediately swarm, waiting for a tasty bit.
What I liked most about the cafe, was seeing the interactions between the staff members and the dogs.  It was clear that the dogs were happy with the people looking after them.  A couple of the dogs would follow the employees around, begging to be played with.  It was funny and cute

The last cafe is only a mentionable.  I saw it in passing and walked up the stairs, but I didn't stay there.  It was called Manhwa Cafe (만화 Cafe)--or a Korean Manga cafe--and they had nothing in English.  But I thought it was still a cool cafe and decided I would mention it.  If you can read Korean or want to practice your reading, this might be the right place for you.  The cafe is just down and across the street from Thanks Nature Cafe toward the Hongdae Station.  It's on the second story so look up!  Closest address point I can give is 358-1 Seogyo-dong, Mapo-gu, Seoul but I don't know the exact address.