There are five palaces in Seoul that have been preserved and opened to the public.  During my time in Seoul, I signed up for a city tour through Viator and ended up going to Deoksugung Palace in time for the changing of the guard ceremony.  (Specific Tour I did).  I had never done a city tour before so I wasn't entirely sure what to expect, but was pleasantly surprised.  Our guide was super friendly and helpful and the pace of the tour was pretty good, too.

I learned that only the Temples and Palaces are allowed to be painted while any other older, traditional house or building remains naturally coloured.  This interesting fact came into play later when we talked about how a King built a house for one of his concubines. Not technically part of the palace, it remains white and brown.

Anywho... Deoksugung Palace was one of our morning attractions.
This first picture wasn't actually taken on that tour.  I went on a second tour the following day, and my guide took me to this vantage point, unknown to foreigners because it's in a business building. I didn't take many pictures of this palace.  Although here is an image inside the main building:
Deoksugung Palace is the most modern palace.  Our guide said that of all the palaces left in Seoul, Deoksugung is the only one that has a western style building.  What's more, the King at the time loved coffee and this building was his coffee room.  Apparently, coffee is also what killed him because there was poison put into his cup, too...

The changing of the guard ceremony was cool to see, too.  It was shorter than the ceremony at Buckingham Palace in the UK, but it was a lot more colourful--and very tourist friendly.
After the changing of the guard, the rope barriers were temporarily dropped so that tourists could get pictures with the men in their ceremonial robes.  Naturally, I got a few, too.

*Note: some of the men were wearing fake facial hair to fully create a more authentic look. 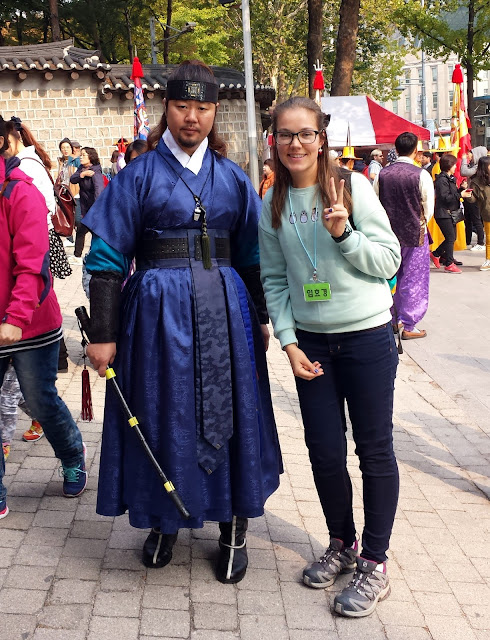 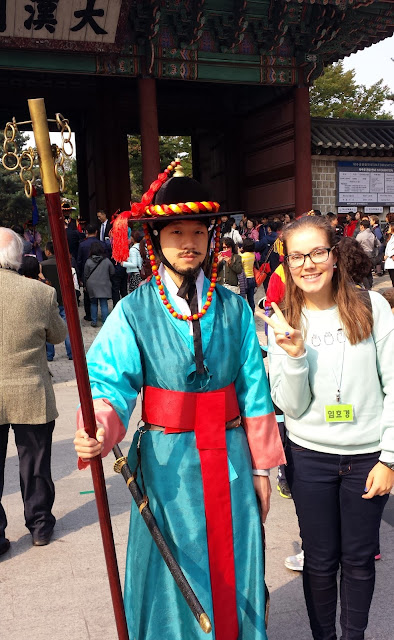